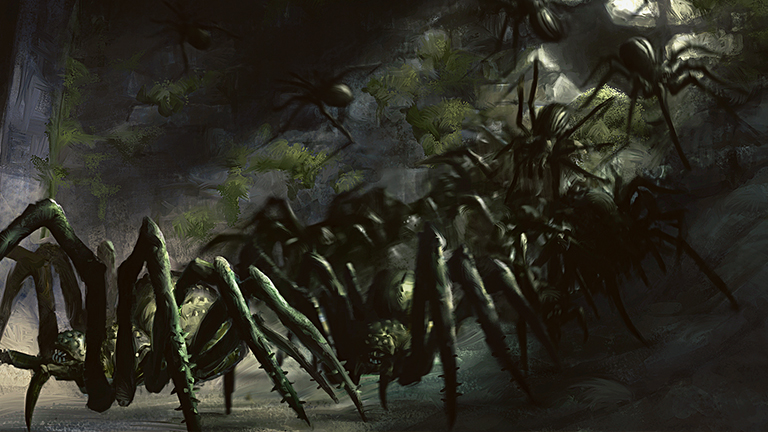 Based on Brian David-Marshall's Sidisi / Spider Spawning Deck as discussed on The Command Zone podcast.
Decklist

1 Barren Moor
1 Lonely Sandbar
1 Tranquil Thicket
1 Command Tower
1 Dimir Aqueduct
1 Flooded Grove
1 Golgari Rot Farm
1 Hinterland Harbor
1 Jungle Hollow
1 Llanowar Wastes
1 Mana Confluence
1 Mosswort Bridge
1 Opulent Palace
1 Shizo, Death's Storehouse
1 Simic Growth Chamber
1 Temple of Mystery
1 Thornwood Falls
1 Woodland Cemetery
1 Yavimaya Coast
Approximate Total Cost:
I think I discovered this deck summer/fall of 2017. Prophet of Kruphix was already banned and I definitely had to replace some of the pricey lands and some cards I didn't have. I think I may have initially put in Seedborn Muse but that wasn't terribly good without flash and the slot later became Splendid Reclamation since I wanted to see how well that did (still haven't cast it in this deck yet).
My initial changes revolved around replacing stuff I didn't have or couldn't run, mostly: Prophet of Kruphix, Craterhoof Behemoth, Ancient Ziggurat, Gaea's Cradle, Tropical Island, Bayou, Rupture Spire, and Underground Sea. I ended up choosing these replacements at the time, more or less: Splendid Reclamation, Dragon Throne of Tarkir (might still get a Craterhoof some day), Exotic Orchard, Forest, Yavimaya Coast, Misty Rainforest, Island, Sunken Hollow.

If you listen to BDM talk about the deck (Command Zone May 2015; Commanderin' January 2019), it's premise is that Spider Spawning is the central card — as if it would be the commander of the deck if you could have a sorcery be the commander. I really like how this deck "goes with the flow" and manages to do something productive with almost anything you end up with in your hand, and almost no tutoring or recursion. I have indeed won with spiders a couple times, but it's also fun to just make a ton of giant squirrels.

As time has gone on, I've made a few changes to experiment with new cards of replace ones I didn't like. Genesis Hydra just never did it for me and I think eventually became a testing slot in which Journey to Eternity currently sits, having not used it yet. Joraga Treespeaker hit the field a couple times but I never leveled it, so when Stitcher's Supplier came out it seemed like a really nice 1-drop for the self-milling side. Jungle Weaver similarly did not spark joy, but Muldrotha, the Gravetide seems pretty awesome.

Underrealm Lich is currently being tested in place of Sultai Soothsayer, but there really isn't any card draw in this deck to take advantage of him. That one might end up switched back but time will tell.

The deck does have some possible weaknesses in the lack of removal or counters, possibility of graveyard getting exiled, etc. But the principle of it seems to be "keep on trucking; don't look back" and it does that pretty well if you're not emptying your hand. I may even cut back on the recursion pieces to maintain that more.

I've considered using Body Double as a form of 'recursion' for a handy creature that happened to die or be milled. This is also sortof a toolbox deck, so Prime Speaker Vannifar could be a useful value piece since the curve is pretty full — I'll need to examine what 'upgrades' are possible and if there are enough to merit more curiosity (if I were to pursue combo with her I would just build a Vannifar deck). Havengul Lich had crossed my mind, but at that point I also start getting into theft, which I don't want to do with this deck because I do it plenty in other decks. I could probably use a bit of flying.
Some deck philosophy points regarding feedback and future changes —
Update - 2019-04-17
Having listened to the newer podcast and seen some updates to his deck, I feel like I grok the premise of the deck better. As opposed to (or, in addition to?) some of the cards I'd mentioned before, I'll be considering some of these:
Last edited by lyonhaert 4 months ago, edited 4 times in total.
Expand Signature
Chainer bbb


This was kindof a rebuild I did a while back. The original version focused a lot on tutoring lands to hand, but that isn't actual ramp. So I decided to try a number of replacements that placed the lands on the battlefield. Also trying Deranged Assistant and Millikin as mana dorks and swapping Elves of Deep Shadow to Joraga Treespeaker. I'd originally removed Treespeaker but I see some value now in giving it a real try since I can play it for g and if it lives its first level is pretty much free.

Also trying Krosan Restorer instead of Somberwald Sage, and thus also added Dimir Aqueduct and Golgari Rot Farm to go along with Simic Growth Chamber in case I get to lay any of those for untapping.

Ghoultree I never cast as it's just a big do-nothing. Muldrotha, the Gravetide is a good card but this deck is mostly creatures and lands so its ability is wasted mostly, whereas Ramunap Excavator can better interact with Oracle of Mul Daya, and Tasigur, the Golden Fang is in for testing as a recursion element along with Genesis. Dragon Throne of Tarkir gets replaced by End-Raze Forerunners, because I'm totally not buying a copy of Craterhoof Behemoth.

This is a spider deck, so I'm adding Ishkanah, Grafwidow to replace Deranged Hermit (because tokens), and Izoni, Thousand-Eyed is not really a straight swap with anything... but also tokens and a potentially useful sack outlet. World Shaper is basically a backup Splendid Reclamation now that I've got some new mana-sinks. Oh and Shizo, Death's Storehouse is hopefully to get some more attack triggers out of Sidisi.

Some cards I've been thinking of testing in this deck (some of which I still haven't gotten around to testing). Spider Spawning is the star, and has a small suite of support cards for retrieval/re-use that I could possibly improve upon. If anybody has some speculation on changes that help support the Spider Spawning + other cool stuff plan, I'm all ears, even if it's new things to try among the "cool stuff" rather than the support for Spider Spawning. I had also looked at Rotwidow Pack, but it seems to have a bit of overlap with Ishkanah and I'm not super keen on exiling creature cards.
Expand Signature
Chainer bbb

Going to try out the Life from the Loam + cyclers package this time around. I should have plenty of other ways to get forests, and these fetches on their way out will be useful in Samut's deck eventually.

Cavalier of Thorns is definitely in for testing, which should be simpler to test than Tasigur. His ETB is nice, but we'll see about that dies-exile trigger since there's a lot of mill and not so much draw here. Tasigur didn't actually see much testing due to the need for opponent choice, but this isn't exactly the kind of deck where many answers are run that could be politicked for, he was mostly just a mana sink. Also I could see opponents giving me back Wonder and Genesis quite readily.

I'm trying out tutorless on both this deck and Chainer for now. Yavimaya Elder is a good card and I'll be giving him a turn here again, and I've been wanting to try Body Double for a while now.

Expel from Orazca because the deck is shy on removal and I wanted to try this one out. Return to Nature / Beast Within / Krosan Grip are also good choices I might switch to later.

Other thoughts -
Quiet Speculation seems like a blow-out tutor able to get both Spider Spawning and Gnaw to the Bone at the same time. I was thinking about trying it but it seems like as much of an enabler as Buried Alive would be in Chainer, which I'm also purposely not running because I'd prefer variance. I'll test it if I put tutors back in.

Songs of the Damned could be a nice ritual, but I don't really have any mana sinks other than Ishkanah, Grafwidow. I need to pay attention to how much mana goes unused on my board and whether I need to consider any mana sinks.

Spitting Image could be useful and fun here, what with LftL moving in, but could also necessitate a bit more land-to-hand effects. This one is possibly top of the list of one I'm thinking of testing later.
Expand Signature
Chainer bbb

Swapped Parallel Lives back to Doubling Season since I needed the former somewhere else and hadn't used DS for the reason I'd taken it out originally.

I also finally got to use Journey to Eternity and flip it. For the setup, the cost of the recursion ability on the flipside, and how often I needed it, it might as well have just been Bond of Revival, because returning Sidisi to mill a bit more was fine, but reanimating Kessig Cage-Breakers at the end of my opponent's turn for pseudo-haste and making 34 2/2 wolves was all the reanimation I needed. If it was Bond of Revival I could probably have done it 2-3 turns earlier instead of biding my time to when it was okay to hold up the 6 lands to activate it, even though I'd have been making around 20 wolves at the time.

Edit: Or maybe it would just be handy to have some Lightning Greaves in there.
Expand Signature
Chainer bbb