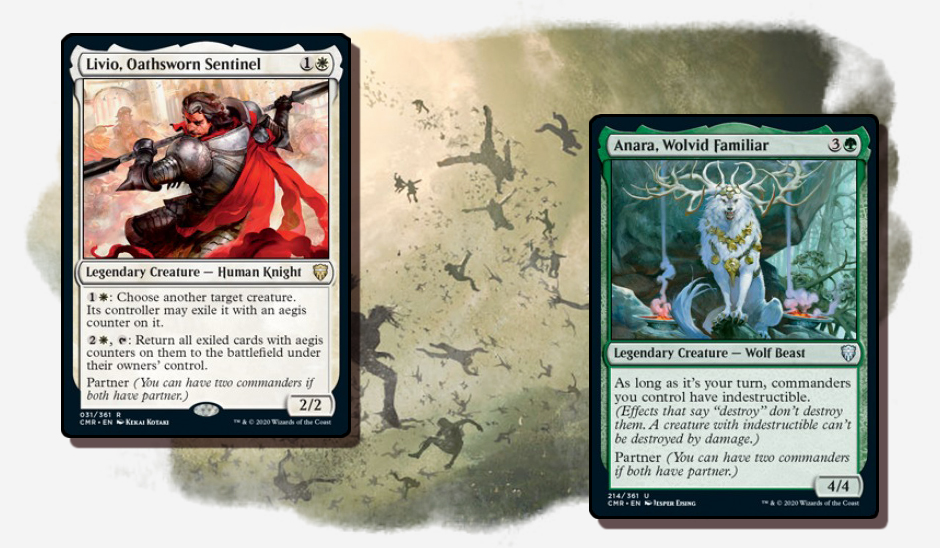 So instead I really looked at Livio as more of a protective commander rather than trying too hard to create a massive blink deck with combos.
The idea is that you just tuck away creatures maybe in response to removal, or even just when you have available mana.
The great thing about Livio is that the exiled cards have particular counters ("aegis") and if he dies, you can recast him later and still get those creatures back as it has nothing to do with the instance of when he was on the battlefield.
So you can just keep putting creatures into exile, with the idea of bringing them all back at a later stage, maybe after some big event has happened.

Destroy all permanents
Queue the idea which is that this is a board sweeper specialized deck. There are 11 board wipes of various kinds.
Given this the deck is looking to put as many creatures into exile with Livio ability to before you cast one of them.
Now to go with this Anara, Wolvid Familiar also gives Livio indestructible in these circumstances.
However maybe the game doesn't line up that Anara remains on the battlefield and this is okay,
Livio can die and you can bring him back on subsequent turns to bring all the creatures you exiled back into play.

Given all the board wipes the deck doesn't have many nonland permanents that are not creatures, as you'll lose them to your own cards.
Therefore the deck is a very heavy creature based deck.
There are a lot of enter the battlefield triggered creatures as this is nice to combine with Livio abilities.

The way you are winning is to grind people out of resources, so you are playing quite a patient game.
With so many board wipes you are wanting opponents to commit to the board, while only need to commit as much as you know you can exile with Livio.
As long as you are not being pressured then you can play it very slow if need be.

There are a number of instants that also give protection to your creatures in case you want to fire off a mass removal spell and you might not be setup with exiling creatures yet and Heroic Intervention, Flawless Maneuver, Teferi's Protection will help with that.
Selfless Spirit can also be used in this way.

Ashaya, Soul of the Wild is a very unique effect, allowing you to tap your creatures for mana. But it is also in the deck because a number of the sweeper specifically say "destroy nonland" with Hour of Revelation, Ondu Inversion, Planar Cleansing, Oblivion Stone.
Ashaya, Soul of the Wild specifically makes your creatures lands, so they wouldn't get removed with these cards.

Flicker Value
Now Livio would cost 1w+2w each turn if you are literally looking to flicker at least one creature each turn.
If you have something like ramp in Kor Cartographer, Solemn Simulacrum, Wood Elves, Springbloom Druid, Yavimaya Dryad, Farhaven Elf, Wild Wanderer then you could do this to block at least one creature each turn and exile it response to get an additional land each turn.
You can afford to play this slower game of value because you get to cast a board wipe when you feel opponents have enough pressure.
Of course additional land ramp means that you have more mana and then you can look to activate Livio to exile another creature as well for more value.

Admonition Angel can also be used in this type of way with using landfall triggers to exile your own permanents. You can then at some stage use Livio on the Admonition Angel to flicker it and then all the permanents you exiled with will come back into play.
If you have land ramp creatures, then you'll get more landfall triggers and you can exile more permanents and get a very mana efficient engine going this way.

Seedborn Muse of course allows you to do all the stuff.

One really need trick is that you can use Anara and Livio ability with Magus of the Disk to actually keep the Magus around in subsequent turns to do this each turn.
What you can do is activate Magus of the Disk ability and while that trigger is on the stack, use Livio ability to exile the Magus. With Anara your commanders have indestructible so survive the board wipe. Then you can bring the Magus back again to keep repeating this until opponents can deal with it.

In a similar manner you can respond to the exile trigger of Mangara of Corondor with Livio ability and the effect will still happen, but now you can bring back Mangara for more use later on.

The deck has a lot of ETB removal creatures as well so that you can really put the clamp down on opponents getting any traction with permanents.

Of note you can use Livio exile ability in response to Leonin Relic-Warder, Fiend Hunter ETB triggers to permanently remove the targets as they would leave the battlefield before the second part of the card could be associated with the first trigger.
You'll probably have come across this special timing before as there are two separate triggers associated within these cards.
But you couldn't do it with say a card like Banisher Priest as it only has one trigger that checks for the card leaving play as well.
I mentioned previously using Admonition Angel to exile you own permanents, but obviously you can use them to exile opponents problematic cards as well.
Here is where you prefer to use the trigger stacking trick of exiling opponents permanents permanently. 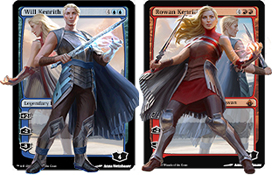 Well I've been playing a ton of the new partner commanders and actually this particular deck has come out as my favorite "casual" deck to play out of the lot.

I have made heaps of changes. I took out all the hate-bear creatures and non ramp mana creatures as you are always building up to board wipes and even though you can exile them before a wipe, they just seemed non necessary given you just want to be building up your land base.

I added more ETB value creatures because that is what you really want to be exiling and bringing back into play.