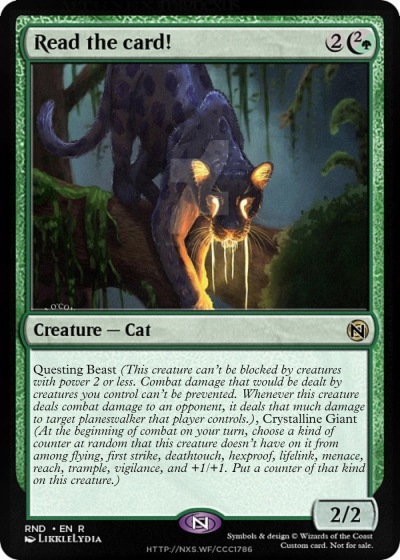 Questing Beast (This creature can’t be blocked by creatures with power 2 or less. Combat damage that would be dealt by creatures you control can’t be prevented. Whenever this creature deals combat damage to an opponent, it deals that much damage to target planeswalker that player controls.), Crystalline Giant (At the beginning of combat on your turn, choose a kind of counter at random that this creature doesn’t have on it from among flying, first strike, deathtouch, hexproof, lifelink, menace, reach, trample, vigilance, and +1/+1. Put a counter of that kind on this creature.)

24 Previews
Releases Jun 11th
The above articles are sponsored content.
Patrons help maintain an ad-light experience, and are never shown ads.
Donate below to support the site and remove all ads.
Plain Text MTGO Decklist Decklist.org Registration Sheet
Our Mission
Privacy Policy
BBCode Guide
Contact Us
Terms of Service
Delete All Cookies
Made possible by our patrons, phpBB, Scryfall, and Others
MTGNexus Beta :: Version 0.1.01627