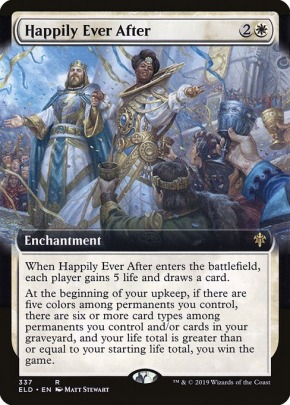 Happily Ever After
Enchantment

When Happily Ever After enters the battlefield, each player gains 5 life and draws a card.

DementedKirby » 10 months ago
Since this is essentially an easier wincon than Coalition Victory I'm guessing the RC are giving this the banhammer for commander?

emily » 10 months ago
Yeah, I doubt that this even sees the light of day in the format. Way too easy to get this to go off.

emily wrote: ↑
10 months ago
Yeah, I doubt that this even sees the light of day in the format. Way too easy to get this to go off.

Scrapbasket alone gets you all the colors. And with having an enchantment creature, instant / sorcery split spell, and and artifact land in the graveyard is enough. So you don't even need to cast those card types or even have them in play. You can discard them with something like Memory Jar and you're set. Either way, the enchantment is on the field since it would be counting itself. So you just need 5 more card types in the 'yard to win.

hyalopterouslemur » 10 months ago
How is this easier than Coalition Victory? With CV, you have most ramp spells will pick up basic lands or basic land types, most fetchlands do the same (and pass the Sun Titan test), and barring that, you have Prismatic Omen.

This requires getting at least six card types on either the battlefield or the graveyard, which means gravehate (which is already played a lot) is what matters here, since typical Commander games toss around a lot of boardwipes, and blue players toss around a lot of counters. Like CV, you can also be hated out by search hate cards like Stranglehold and Aven Mindcensor.

emily » 10 months ago
You're bound to have a land and an enchantment (this) on the battlefield. It's safe to assume that in a five-color deck, you're running some sort of mana rocks, so there's your artifact. You've probably cast a few instants and sorceries by the time you play this, and you're bound to have at least one creature or planeswalker in your deck. (Your commander, silly!) And since they don't all have to be on the battlefield, you just have to dodge graveyard hate, which not everybody plays.

Since your commander must have a WUBRG color identity by default, it's reasonable to assume you'd have colored permanents in the other four colors in your deck. And since this gains you 5 life, there's a solid chance that this bumps you back up to your starting life total or higher. (Hello, Serra Ascendant and Divinity of Pride!) The main issue from there is dodging removal... but you're playing blue, so maybe you have a few counterspells around. Also Boros Charm exists to give your stuff indestructible, and that's a Commander staple, seeing as how it's been in two precons. To really make sure the enchantment sticks, you could use Alchemist's Refuge or Emergence Zone to flash it out.

Yeah, it's easy to counter. So was Coalition Victory. Difference is, CV cost 8 and this cost 3. You're not playing this on turn 3, so you're likely going to have enough mana to protect this. If CV is banned, it stands to reason that this should be banned too, and they shouldn't hesitate. Imagine losing to this. It would feel miserable. Losing to CV feels miserable. It's an overpowered reward just for playing five colors.

marioguy3 » 10 months ago
I don't think this card is overpowered in EDH as it is another silly win condition type card, which can be fun. It also gives each player some small benefits, particularly the draw card. Besides, there are a lot less fun cards that don't have the literal words "I win" in the textbox. Particularly that stupid nine mana blue sorcery from that fun Conspiracy sequel set.