I restated the challenge a little bit to be absolutely clear.

EDIT: By the way, tonight's edition of New Challenge Every Day will be marked August 1st so that the "current" day can be the same as for the DCC. I know this seems pretty minor but I just want to warn everyone in advance.

.::Yesterday's Submissions::.
A card with XX in its mana cost

Siege Hydra XXG
Creature-Hydra R
Trample
Siege Hydra enters the battlefield with X +1/+1 counters.
Other creatures you control get +1/+1 for each counter on Siege Hydra.
0/0

Word of Towazu XXUUU
Sorcery - Arcane (M)
Choose target nonlegendary creature an opponent controls. Draw X cards, then you gain control of that creature if its power is less than the number of cards in your hand.
Only a mind of iron can fathom the Unspeakable One without going mad, and only one of diamond can shut out the temptation of its knowledge.

Expand Signature
Psst, check the second page of Custom Card Contests & Games! Because of the daily contests, a lot of games fall down to there.

IIW: a card for maths nerds

Sacrificial Pact B
Enchantment (Rare)
Whenever a creature kills itself, its controller draws two cards.

Tundra Elemental 3SW
Creature - Snow Elemental (Uncommon)
SS: Freeze target tapped creature. (That creature doesn't untap during its controller's next untap step.)
1SW: Prevent the next 3 damage that would be dealt to Tundra Elemental this turn.
4/3 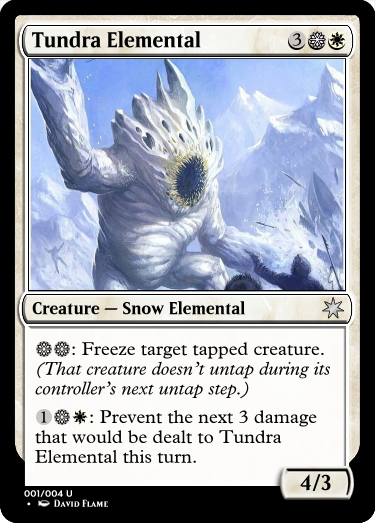 IIW: New kinds or qualities of mana, like S
Expand Signature
Psst, check the second page of Custom Card Contests & Games! Because of the daily contests, a lot of games fall down to there.