"Fury of the Roil" 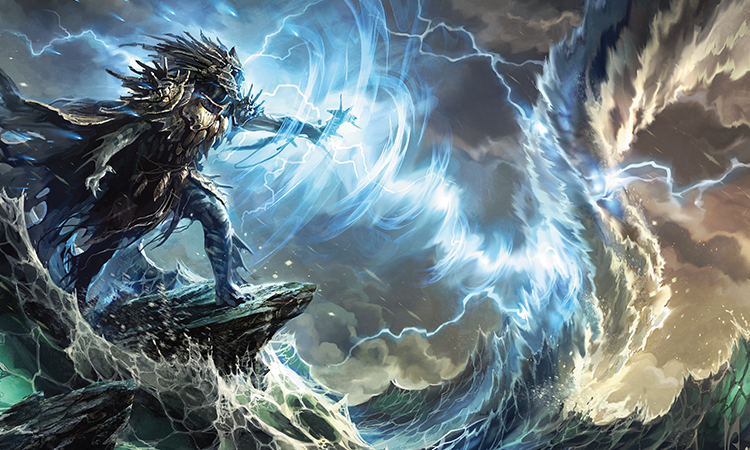 Scatter to the Winds, taken from magicthegathering.com, by Raymond Swanland and Wizards of the Coast
Welcome to the Card Creation League! Everyone is free to participate in either or both of the first two rounds. Come join us!

It's Classic Zendikar month in the CCL - a new Zendikar set will be released much later this year, which most everyone is excited for but which we know nothing (save for the name Zendikar Rising) about yet. So this month will be about the already established history and lore of Zendikar.

Your submissions are due Friday, February 28th, 23:59 EST.
Schedule
Expand Signature
Everything is here, that never was.

Lifebloom Outbreak 1GG
Instant (Rare)
Untap all lands you control. They gain indestructible until end of turn.
Awaken 5 – 5GGG (If you cast this spell for 5GGG, also put five +1/+1 counters on target land you control and it becomes a 0/0 Elemental creature with haste. It's still a land.)

Double Act 3UU
Sorcery (Rare)
Create a token that's a copy of target creature.
Surge 1UU (You may cast this spell for its surge cost if you or a teammate has cast another spell this turn.)
"Luckily, I brought backup."
Last edited by Subject16 1 month ago, edited 2 times in total.

Wisdom of the Wild 2GG
Sorcery (R)
Awaken 4 - 5UG (If you cast this spell for 5UG, put four +1/+1 counters on target land you control and it becomes a 0/0 Elemental creature with haste. It's still a land.)
Draw cards equal to the greatest power among creatures you control.

Boundless Renewal 2G
Sorcery (U)
Surge 3G (You may cast this spell for its surge cost if you or a teammate has cast another spell this turn.)
Return target card from your graveyard to your hand.
If this spell's surge cost was paid, it has rebound.
Growth begets growth.
Last edited by slimytrout 1 month ago, edited 4 times in total.

Crushing Stampede RG
Sorcery (U)
Until end of turn, whenever a creature you control attacks, you may destroy target artifact or enchantment.
Awaken 3 - 3RG (If you cast this spell for 3RG, also put three +1/+1 counters on target land you control and it becomes a 0/0 Elemental creature with haste. It's still a land.)


Consuming Light 3W
Instant (U)
Surge W (You may cast this spell for its surge cost if you or a teammate has cast another spell this turn.)
Exile target attacking or blocking creature.
---------
Zendikar had already seen its fair share of shadows. It was time for an era of light.

Dispiriting Remoteness 1w
Instant (u)
Target attacking creature loses all abilities and has base power and toughness 1/1 this turn.
Awaken 2 - 2ww (If you cast this spell for 2ww, put two +1/+1 counters on target land you control and it becomes a 0/0 Elemental creature with haste. It's still a land.)

Thought Experiment 3u
Instant (u)
Draw two cards
Surge , discard a card. (You may cast this spell for its surge cost if you or a teammate has cast another spell this turn.)

And the round is closed. Please make sure to critique everyone else and arrange them into a top 3.
Expand Signature
Everything is here, that never was.

Henlock: I'm a big fan of the awaken card, all the way down, it's a fun trick no matter what. The surge card is interesting too. I can't find anything to complain about with it, though it just strikes me as less cool/innovative.
slimytrout: I like Wisdom of the Wild very much, it seems balanced. Boundless Renewal is interesting. It's a costlier but more versatile regrowth. I wonder if the surge cost is ever going to feel worth it in competitive formats or even limited, though.
Subject16: Double act feels fine, but lifebloom just seems too good lately. Untapping all lands can be such powerful ramp that I think this would get abused and the awaken would be mostly ignored.

Subject16
Show
Lifebloom Outbreak: Feels like it does too much at 3 mana (cheaper Turnabout for decks that want it) and too little at 8 mana (who needs their 5/5 to be free when they have 8 mana?).
Double Act: When you are able to surge it, you get... a Cackling Counterpart that can't be flashed back? A little weak and a little close to existing cards.
jamblock
Show
Crushing Stampede: Definitely interesting, but both modes are probably too high-setup for most single player formats. I imagine it could see play in multiplayer though, where board states get more crowded and targets abound.
Consuming Light: Quite strong if you can surge it, fairly weak if you can't, but not the most innovative - kind of just Divine Verdict with exile and surge.
Henlock
Show
Dispiriting Remoteness: Name is a little weird, but otherwise a very fun card - works as either a narrow Turn to Frog or a Bright Reprisal that comes with a 2/2 instead of a card. I don't think it's the strongest (neither of those cards are real powerhouses), but the idea is great.
Thought Experiment: Could have used flavor text, but a fun idea. Also probably a little strong at the surge cost in modern, where taking 1 mana off of Thrill of Possibility is a big deal.
1. Henlock
2. jamblock
3. Subject16

@Subject16 Please try to get in at least a top 3 by midnight Eastern.
Expand Signature
Everything is here, that never was.

Man, literally the only permutation out of 6 that keeps me out of the finals

And our finalists are Henlock and jamblock. Round to come soon.
Expand Signature
Everything is here, that never was.
Locked Previous topicNext topic
13 posts • Page 1 of 1