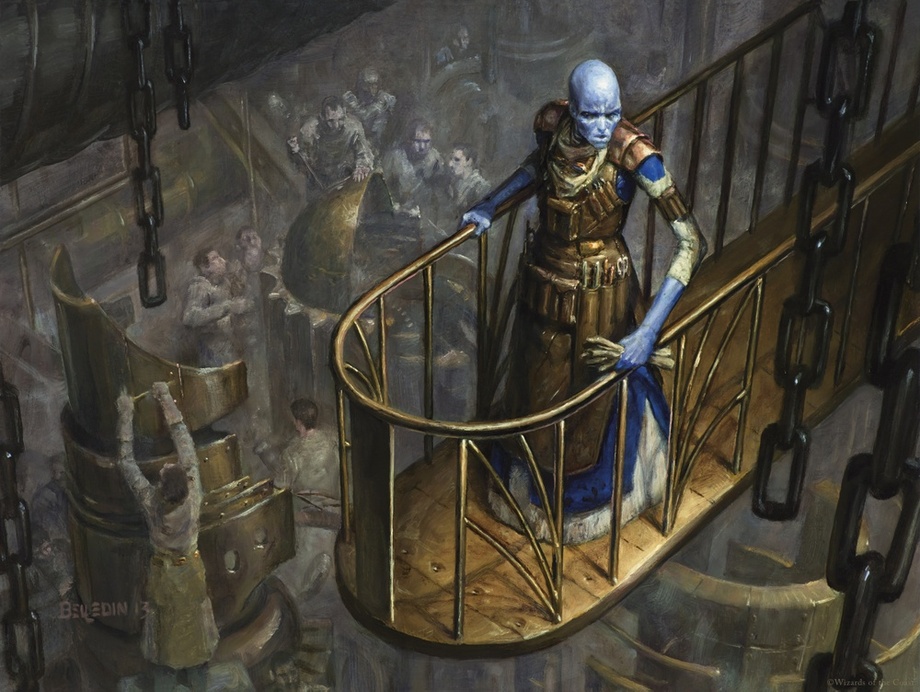 This month, the CCL has been doing noncreature mechanics -- in the finals, we're going all out with our competitors' four mechanics:

Breath Tax B
Instant (C)
Each opponent loses 1 life and you gain that much life.
Splice onto instant or sorcery—1B or tap an untapped Vampire you control (As you cast an instant or sorcery spell, you may reveal this card from your hand and pay its splice cost. If you do, add this card's effects to that spell.)
Death is cheaper.

Druidic Binding GGGG
Enchantment - Aura (R)
Enchant land
Totem armor
You control enchanted land. It's a 4/4 Elemental creature with vigilance, haste and "This can't be sacrificed." It's still a land.
Worse than druids could borrow your local landmarks. At least they'll bring it back how they found it.

Conquest Architect 1W
Creature - Human Artificer (U)
When Conquest Architect enters the battlefield, you may attach a Fortification you control to target land you control.
T: Target fortified land you control becomes a 3/3 Construct creature with first strike until end of turn. It's still a land.
"A fortress is only suitable to hold what you have. I can do better."
1/3
Last edited by Ink-Treader 1 month ago, edited 7 times in total.

Fulguritize 1RR
Instant (R)
Target instant or sorcery card in your graveyard gains jump-start until end of turn. Whenever you cast a spell with the same name as that card this turn, that spell deals damage equal to its converted mana cost to target creature.
Jump-start
Ral and Mizzix's target-zapping contests featured infinite do-overs.

Healers' Ward 2
Artifact - Fortification (C)
Fortified land has "T: Prevent the next 1 damage that would be dealt to any target this turn."
Tap two untapped Clerics you control: Untap fortified land.
Fortify 2

Estrid, Who Communes with Umbras GWU
Legendary Planeswalker - Estrid (M)
+2: All Auras you control attached to permanents you control gain totem armor until the beginning of your next turn.
-2: Create a green, white, and blue Aura enchantment token named Estrid's Glory attached to target creature. The token has enchant creature and "Enchanted creature gets +2/+2 and has flying, vigilance, and trample."
-8: Exile all permanents that aren't enchantments, enchanted, or Estrid.
{[4]}

Obsessive Akuba 1B
Creature - Spirit (U)
Whenever you splice a card onto a spell, Obsessive Akuba gets +1/+1 and gains lifelink until end of turn.
Discard a black card: Add BB. Spend this mana only to pay splice costs.
Left to their own devices, they would steal all of Takenuma's mana, channeling it into a single dark purpose.
1/1
Expand Signature
Everything is here, that never was.

Do you want me to hold the round open longer for you to do so? I don't have a particular problem with that, but if I don't hear from you explicitly that you'd like that, at midnight I'm probably going to close the round and open the poll.

Do you want me to hold the round open longer for you to do so? I don't have a particular problem with that, but if I don't hear from you explicitly that you'd like that, at midnight I'm probably going to close the round and open the poll.

Close it when it's supposed to close. I've made the last critical change, anything else will be proofreading

Round is closed and poll is up.
Locked Previous topicNext topic
6 posts • Page 1 of 1

Zero vs. Hero: A Case Study of Jank