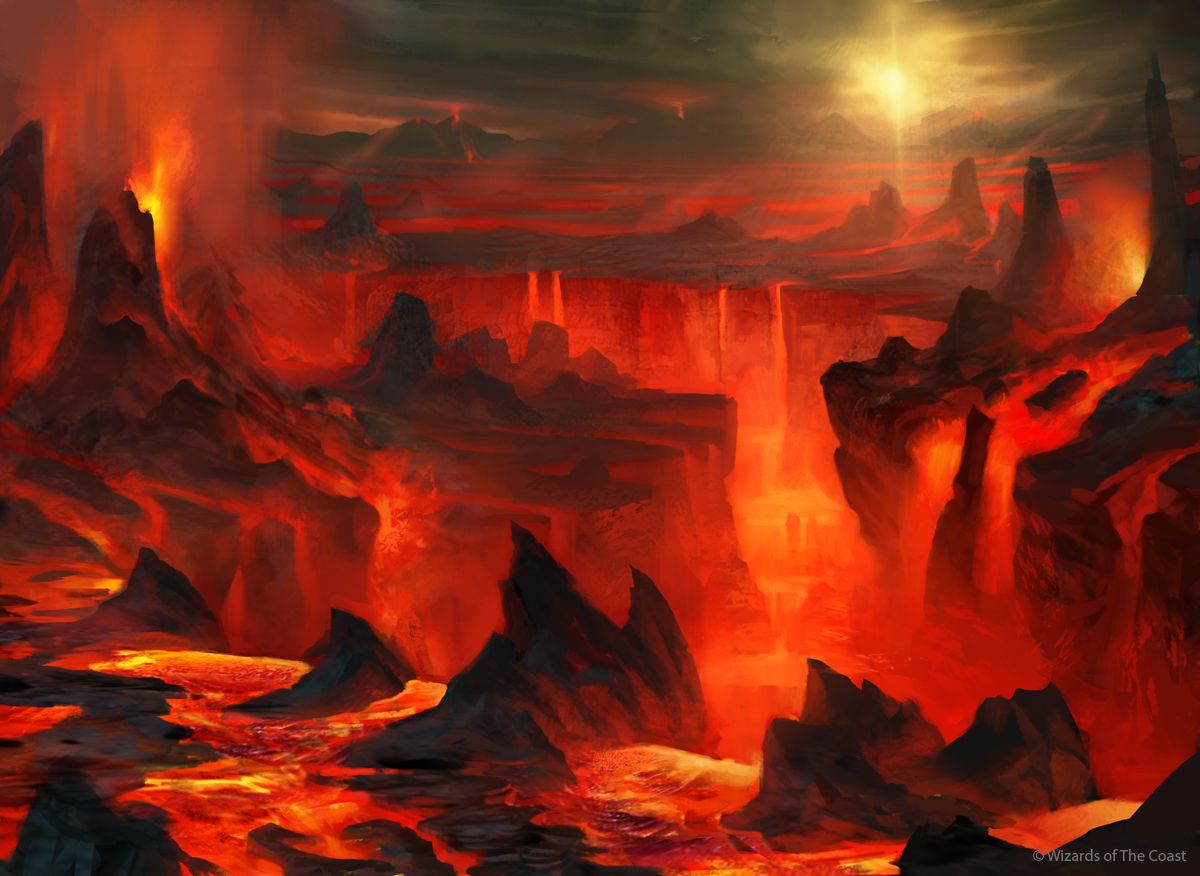 Shivan Gorge, taken from DeviantArt, by Adam Paquette and Wizards of the Coast
Welcome to the Card Creation League! Everyone is free to participate in either or both of the first two rounds. Come join us!

It's Deep Magic Lore Month here in the CCL and with a setting that spans dozens of known and infinitely more unknown planes of existence, Magic has lots of legendary lands. Unfortunately, a lot of ones from the past have been either extremely underpowered or extremely broken. This is your chance to make a famous Magic location into a more reasonable card.

Your submissions are due Thursday, January 2nd, 23:59 EST.

Special note: Due to this being a busy month for many people in terms of traveling, seeing family, working overtime, school/university finals, et cetera, a lot of deadlines have been extended. In this case I am explicitly planning to not begin the final round until the beginning of January!
Schedule
Expand Signature
Everything is here, that never was.

Yeah, ok, this is it. I don't think I've got anything better. I was undecided with another one in my spoiler until the last minute, but let's keep this. I hope I won't have regrets afterwards. I'll move my spoiler with the other versions in the discussion thread.

Based on Pendelhaven — Link to Wiki page

Paliano, Raised on High
Legendary Land (M)
Will of the council — When Paliano, Raised on High enters the battlefield, starting with you, each player votes for colors or colorless. If colors gets the most votes or tied for most votes, put a gem counter on Paliano.
2, T: As long as Paliano has a gem counter on it, add 3 mana in any combination of colors. Otherwise, add 4.

Mikokoro, Center of the Sea

Mikokoro, Shrine of Enlightment
Legendary Land (Mythic)
T: Add C.
W, T: Each player draws a card.
1U, T: Draw a card, then discard a card.
2B, T: You draw a card and you lose 2 life.
"You will find everything you seek at Mikokoro, but most importantly - you will find out why everyone who have been there never returned the same."

bravelion83
Show
This is nearly Field of the Dead power level. Definitely strong enough to spawn its own archetype, like token ramp. The last ability is supremely powerful, even at 8 mana and sorcery speed, though these help. Very strong, but not too overpowered. Overall a good-ish card.
Icarii
Show
2, T is essentially tapping 3 lands. Getting 3 mana as the outcome is pretty bad. Either you get a land that doesn't produce mana - only filters - or you get a land that taps for C. Unplayable outside Commander maybe and I don't think it would be good even there.
netn10
Show
The card feels very complete, with all those effects being a variation of one: Draw a card. Nice. Better than Mikokoro, Center of the Sea in white (questionable, should probably cost WU). Better than Desolate Lighthouse. Usually better than Castle Locthwain. Oh well. Being Legendary helps, but boy, this is too much.
Top 3
Show
1. bravelion83
2. netn10
3. Icarii
Last edited by Ryder 1 month ago, edited 1 time in total.

Well, the deadline has technically passed, and one of us has already critiqued, so I guess I can do that too.

Icarii wrote: ↑
1 month ago
Paliano, Raised on High
Legendary Land (M)
Will of the council — When Paliano, Raised on High enters the battlefield, starting with you, each player votes for colors or colorless. If colors gets the most votes or tied for most votes, put a gem counter on Paliano.
2, T: As long as Paliano has a gem counter on it, add 3 mana in any combination of colors. Otherwise, add 4.

Quality mistake: you can't add generic mana. This should be "Otherwise, add CCCC." But that's not the thing that leaves me perplex with this card. That is actually just a complicated way to say "T: Add C." I would have liked this much more if it had been a separate ability, like:

T: Add C.
2, T: Add three mana in any combination of colors. Activate this ability only if Paliano has a gem counter on it.

If you put it this way it's much more comprehensible to everyone, including less experienced players, in my opinion, and you also prevent potential problems like the ones that I'm about to talk about. Lands that add that much mana all at once have historycally proven problematic. In fact, I think something like that could see play in Legacy? I don't know Legacy well as a format, but I remember a deck using... wait, that might have been an artifact. Anyway, something that gave a bunch of mana and then untap it with Voltaic Key I think? Yes, it was for sure an artifact then. And then there was some kind of loop that ended up in infinite mana. What happens here if I have something that allows me to untap a land for zero or one mana? Suppose this has no gem counters, I tap it, I get four mana. I use one to untap this land and two to activate it again, and on, and on, and on. I've made an infinite mana loop. Does a card that allows me to untap a land repeatedly for max one mana exist? A Voltaic Key for lands? If it does, this might get really dangerous. And this without even mentioning ability cost reductions, that only make this worse. *checks Gatherer* Oh yeah, many things exist. Too many to be listed here now. Infinite loops might really be a problem with this, I think. Of course, I'm just human. I can also be wrong. But that's my first impression.
What I like about this card? The very interesting play in multiplayer. This is an excellent use of will of the council. And I also like the further confirmation that we are opposites in card design. This is a very out-of-the-box card, as usual from you. I have played inside of the box, as I always do, and where I know I'm the strongest.

This is very elegant, not too long or complicated, and also with an original variation on landfall. I feel like I couldn't ask more from this card. I really like it in a vacuum, and the synergy with the original Valakut. With both on the battlefield, you Scapeshift and you do what you do with the original Valakut, while a bunch of Mountains have just entered the battlefield, so you can also activate this to deal even more damage. If I had to find a weakness in this card it would be the double drawback (legendary + enters tapped). Not sure that's needed, and I'm not a big fan of that. But overall, a very nice throwback that also makes a lot of sense on its own while being very elegant at the same time. It would be quite hard to do better than this in my opinion. I think this is easily the best card this round among all four, including mine.

Mikokoro, Shrine of Enlightment
Legendary Land (Mythic)
T: Add C.
W, T: Each player draws a card.
1U, T: Draw a card, then discard a card.
2B, T: You draw a card and you lose 2 life.
"You will find everything you seek at Mikokoro, but most importantly - you will find out why everyone who have been there never returned the same."

Ok, I had to go check what this is. But once I did, I got this immediately. I've also understood that you like a lot the new addition of "everyone draws" in white, in fact I see you using it everywhere. Not a problem, I like it too, and I design cards around that too. It was just an observation. I love this card from a holistic point of view, it feels as a single unity, and the sequence of the abilities is a big part of that. Costs: 0, 1, 2, 3 mana plus tap, for adding mana, ok that's a land, it does that, and then everybody draws, you loot, you draw with a drawback... where's the last piece of the puzzle? The simple "Draw a card" for four mana, probably four generic mana? My inner Mel protests for that ability's absence! He would have probably given up the flavor text to add that. Anyway, no problems with the flavor, the name is literally taken from the flavor text of the previous version, and the flavor text is quite good and I like it a lot. There is only that missing piece that leaves a sour taste in my mouth... but this is still excellent work anyway.

bravelion83
Show
The first ability is very much the Pendelhaven we all know and love. The second ability, however, is an entirely different entity. It reminds me of Cratherhoof Behemoth, and your card being a land that can be used in the early game is likely way more powerful. Pendalhaven cared about small creatures, 1/1 to be precise and your iteration cares about strength in numbers. The flavor text is really good and evocative, I like it a lot.
Icarii
Show
This is a really interesting one. As with all Will of the Council cards, their value changes a lot when you are playing a 1 vs 1 game. The idea of putting this mechanic on a land is really intriguing but I thing the execution might be a bit weak - the land doesn't provide you mana in the first few turns, and after that, it could backfire on you greatly if people knows you are playing two or more colors.
Ryder
Show
You captured the feeling of the original Valakut pretty well while twisting it into an entirely different card, so this is cool. This land in mono red essentially means that your opponent can't play 1 toughness creatures, but being legendary and entering tapped helps balancing it. Overall, noting groundbreaking, just a good and solid card but might be playable in the oldest of formats.
Top 3
Show
1. Icarii
2. Ryder
3. bravelion83

bravelion83: Even if it didnt have the last ability, we are already increasing the power of the original card. Not strictly better mind you but 99% of the time better. However, lands shouldnt have repeatable abilities this powerful that just require a mana dump and counting lands. This would be a commander staple for all the wrong reasons while defining standard. How much would a repeatable overrun cost on a land? It would still be playable even if it saced itself to do it. Too good.

Ryder. This design makes a lot of sense, but is pretty tame. A solid card, well balanced, but not the most inventive/fresh feeling.

netn10: This is an interesting direction to take Mikikoro. I like the idea, it's versatile and showcases color strengths. However, I think that versatility should make each activate ability cost 1 more. Consider Desolate Lighthouse and Geier Reach Sanitarium.

And the finalists are netn10 and Ryder. Final round to come soon!
Expand Signature
Everything is here, that never was.
Locked Previous topicNext topic
10 posts • Page 1 of 1