I Guest-only Advertisement. Login or Register to hide this ad.

Guardman
A Dog's Dream of Man
Posts: 399
Joined: 1 year ago
Pronoun: he / him
Location: In a Turn-Based World
Has thanked: 15 times
Been thanked: 44 times

Just wanted to share a draft I just did on Arena where I opened two Gonti, Lord of Luxury (pack 1 and pack 2): 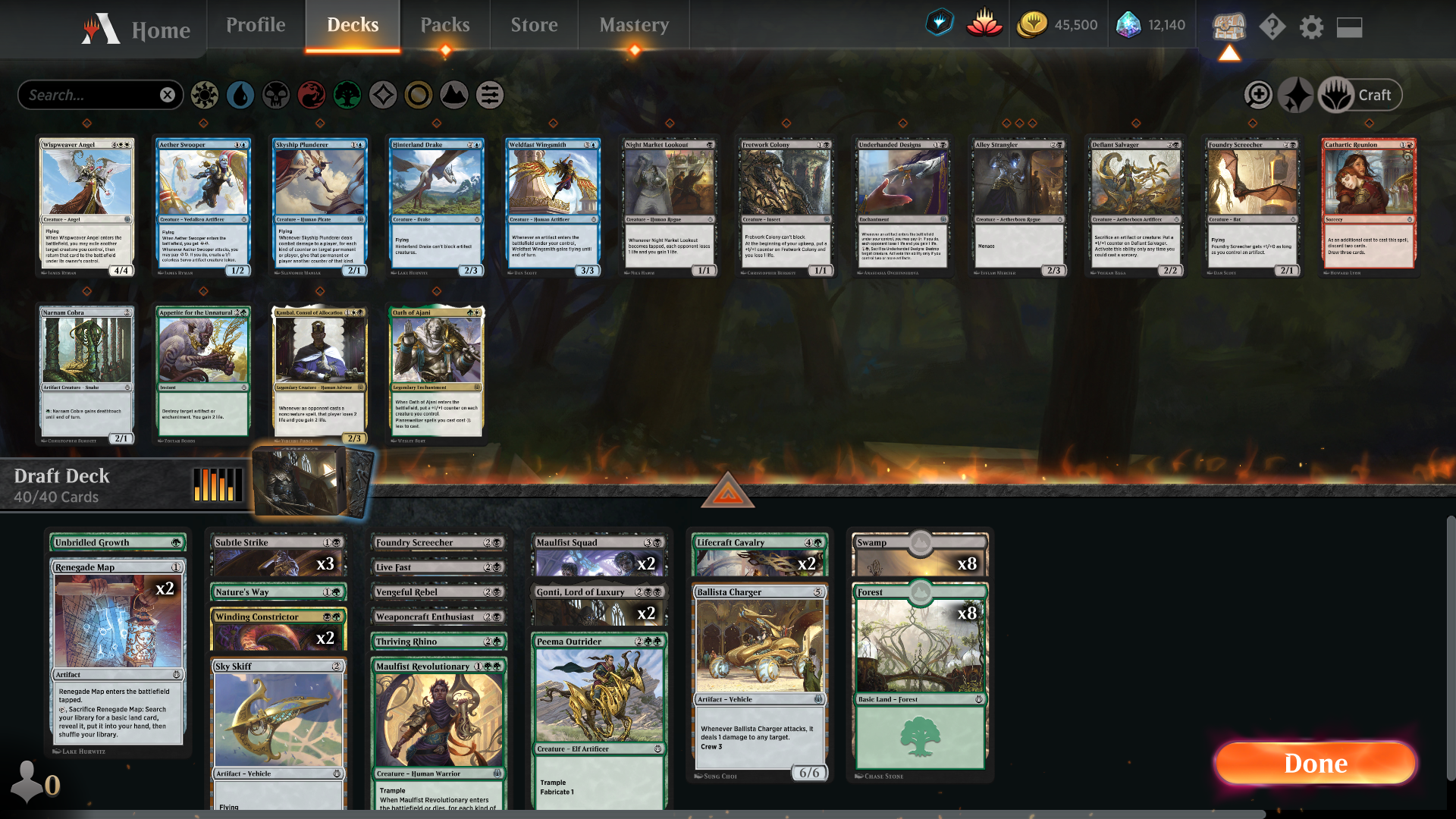 I ended up going 7-2 with the deck, losing on to a UW Flyers deck that perfectly curved out on turns 1-5 and I took five damage due to my own Fretwork Colony (Not even a turn two Fretwork Colony in a counters deck is good... and I put in Sky Skiff after that game) and a Azban Revolt deck where I played both Gontis, but ended up only clearing lands from the top of his deck (I got hits both times, but they were basically worthless cards). Funnily enough my best Gonti hit was when I got an Inventor's Goggles and was able to play it and a Maulfist Squad in the same turn. The opponent couldn't handle a Menace creature with that much toughness.

Even funnier is that the deck could've been even better. First off I didn't take a green card until pick 12 of the first pack. And that was after I passed Peema Outrider for a second Subtle Strike in pick 11. In the end, I actually think it was the correct pick given how my deck turned out, but after I picked it I was kicking myself. I even got a Lifecraft Cavalry as pick 14 in pack 1. If I payed more attention I probably should've pivoted sooner to green, but I was passed two strong blue cards in Skyship Plunderer and Aether Swooper. I could've also had a Fatal Push, but it was in the same pack as Oath of Ajani and I was thinking about splashing it and Kambal, Consul of Allocation in my deck. Given I ended up not playing white, Fatal Push probably would've been better, but at the time I think either or would've been correct given I had two Winding Constrictors.

Finally, this isn't specific to the deck, but I feel Ballista Charger and Subtle Strike are very underrated in the format. There are a ton of one toughness creatures and tokens in the format. And everytime I play with these cards and Make Obsolete I am always surprised by how late I can pick them up.
Expand Signature
Etali, Primal Storm EDH: All Chaos! All the Time!
Post Reply Previous topicNext topic
1 post • Page 1 of 1