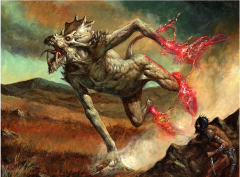 Throw into Oblivion 3WB
Sorcery (R)
For each permanent type among permanents you control, destroy up to one target permanent of that type. (Artifact, creature, enchantment, land, and planeswalker are permanent types.)

Tome of Vhedrasa
Artifact R
, , Sacrifice two land: Draw two cards.
"The oldest of the Eldrazi, Vhedrasa comes from a time even before my forefathers. From a time of emptiness."
—Borugorugoron, the Immense

Town of Ilkhofen
Land
: Add W, U or B. Town of Ilkhofen phases out.
Within the tiny village, tucked into the valley of Schneedress, streets vanish in the mountain fog, and bridges disappear into the mist.

Tathlag the Grovetender 1BRGW
Legendary Creature - Giant Druid (M)
Trample
Giants you control get +2/+2 for each Treefolk you control.
Treefolk spells you cast cost 3 less to cast for each Giant you control.
Descendant of Moran, whom both the peoples of the "great folk" revere.
3/6

Psst, check the second page of Custom Card Contests & Games! Because of the daily contests, a lot of games fall down to there.

Votes: Rithaniel (should be "lands" plural in the activation cost though), OneAndOnly

I'm a simple Magic player since 5 years ago from China. Now I live in New Jersey.

Tome of Harriskane
Artifact R
, : Each player with fewer cards in hand than the player with the most cards in hand draws cards equal to the difference.
"I have seen the history of Harriskane. I have wandered through gateways into its past. It has gone through much, and what is left is neutral. There is no emotion left in its bones."
—Uxester, Who Has Seen Ten Thousand Doors
Selection of Music
Show
And a Few Quotes
Show
"Why are numbers beautiful? It's like asking why is Beethoven's Ninth Symphony beautiful. If you don't see why, someone can't tell you. I know numbers are beautiful. If they aren't beautiful, nothing is."
― Paul Erdős
“I am, somehow, less interested in the weight and convolutions of Einstein’s brain than in the near certainty that people of equal talent have lived and died in cotton fields and sweatshops.”
― Stephen Jay Gould
Post Reply Previous topicNext topic
7 posts • Page 1 of 1