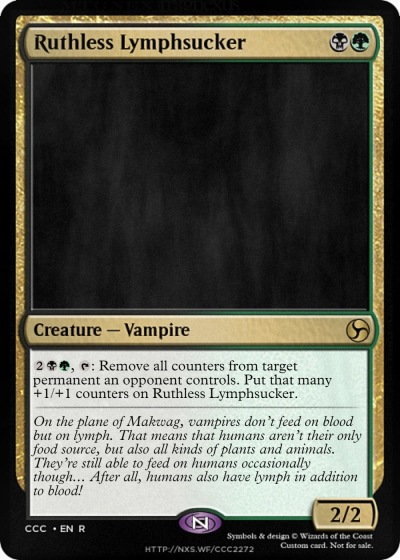 {2}{B}{G}, {T}: Remove all counters from target permanent an opponent controls. Put that many +1/+1 counters on Ruthless Lymphsucker.

On the plane of Makwag, vampires don’t feed on blood but on lymph. That means that humans aren’t their only food source, but also all kinds of plants and animals. They’re still able to feed on humans occasionally though... After all, humans also have lymph in addition to blood!

24 Previews
Releases Jun 11th
The above articles are sponsored content.
Patrons help maintain an ad-light experience, and are never shown ads.
Donate below to support the site and remove all ads.
Plain Text MTGO Decklist Decklist.org Registration Sheet
Our Mission
Privacy Policy
BBCode Guide
Contact Us
Terms of Service
Delete All Cookies
Made possible by our patrons, phpBB, Scryfall, and Others
MTGNexus Beta :: Version 0.1.01629