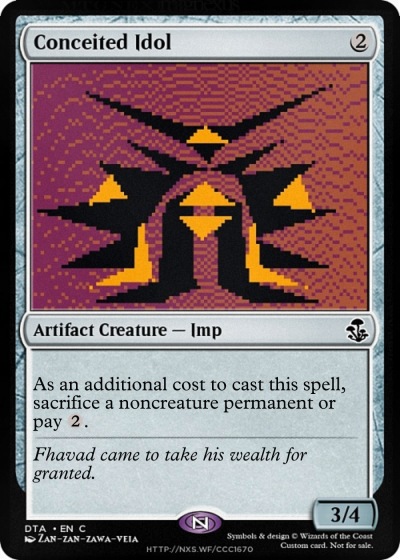 As an additional cost to cast this spell, sacrifice a noncreature permanent or pay {2}.

Fhavad came to take his wealth for granted.

3/4
Art by Zan-zan-zawa-veia
Card Lore
(Flavour entry #1!)
Fhavad is the main mover of this set but he's already absent from the world. His ultimate wish was to help the people of his country sublime to a better place, seeing his world as a desolate, dead-end wasteland full of demonstrations of the baser instincts (when it's actually a perfectly decent land of wilderness and life!) He makes that happen, but in a way that leaves the world he's departed collapse into chaos. Red and blue's typical hold on willpower inverts; neither colour can any longer support truly sapient creatures. White, black and green's consciousness holds but its most developed people - Rabbitfolk, Banshees and Dryads, who were left behind by Fhavad's movement - become truly compulsive and suspicious of any attempts at intellectualization or enlightenment. The Rabbitfolk are ceaseless nostalgists and archaeologists of their own past, the Banshees are libertines who live for expression and song and the Dryads long for absolute isolation again, freedom from the Humans they consider wrongminded. They get that wish: there are no Humans in the set.

Conceited Idol is just a sign that Fhavad's quest might have been fulfilled by the aid of unsavory abyssal help. A man trying to leave everything behind will have no problem sacrificing what he has - but maybe he should've asked a few questions about who benefitted from the act!
Comments
Subscribe

By Nick Lambert, and Rumpy