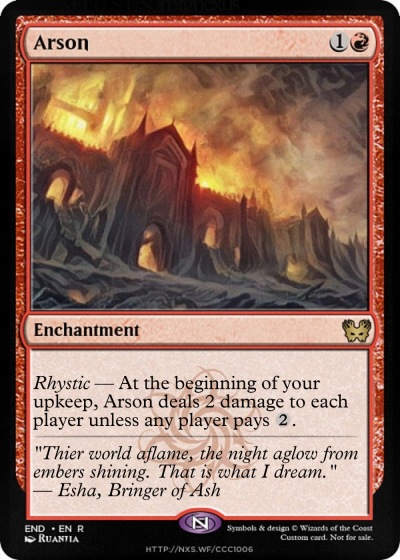 Rhystic — At the beginning of your upkeep, Arson deals 2 damage to each player unless any player pays {2}.

"Thier world aflame, the night aglow from embers shining. That is what I dream."

Arson represents Esha's first major attack on Aetoria, with the burning of Oria. This event marks the beginning of all out war between the Shaiel and Aetoria. While there had already been many clashes between the two before, each side was content with pretending they were isolated incidents. War always appeared to be looming on the horizon, but there were many voices, on both sides, contending for peace and patience. With the burning of Oria, however, these voices were silenced and even the most tempered hearts in Aetoria cried out for vengeance
Arson being used as a trigger for your own reprisal abilities is fully intentional, and reflective of the storyline from an outside perspective. Aetoria and the Shiael are manipulated into war by the Duiin Sii, with neither realizing their common enemy until the end. In building for war against each other, they ended up preparing for war against the Duiin Sii.

Arson originally triggered during each player's upkeep, being more reflective of Esha's ability, albeit with a higher casting cost. This simple seemed too harsh for an enchantment in a multiplayer setting, so it was reduced to your upkeep only.
Comments
Subscribe

413 Previews
Releases Apr 23rd
The above articles are sponsored content.
Patrons help maintain an ad-light experience, and are never shown ads.
Donate below to support the site and remove all ads.
Plain Text MTGO Decklist Decklist.org Registration Sheet
Our Mission
Privacy Policy
BBCode Guide
Contact Us
Terms of Service
Delete All Cookies
Made possible by our patrons, phpBB, Scryfall, and Others
MTGNexus Beta :: Version 0.1.01586