Welcome new students of Strixhaven! I'm Marq, one of your campus liaisons. We've convened this emergency meeting to brief you about a noted increase in Oriq activity. There have been several confirmed sightings of Mage Hunters on the outer edge of the campus, as well as one spotted inside the Biblioplex.

I can see by the looks on several of your faces that most of you do not know what a Mage Hunter is. This and other threats were covered in the Safety section of your orientation package. You can see a picture of the Mage Hunter on page 47.

If you no longer have your orientation package we have additional copies available for purchase in the Administration building. It is highly recommended you purchase a copy. For now, I will conjure an illusion of the creature. 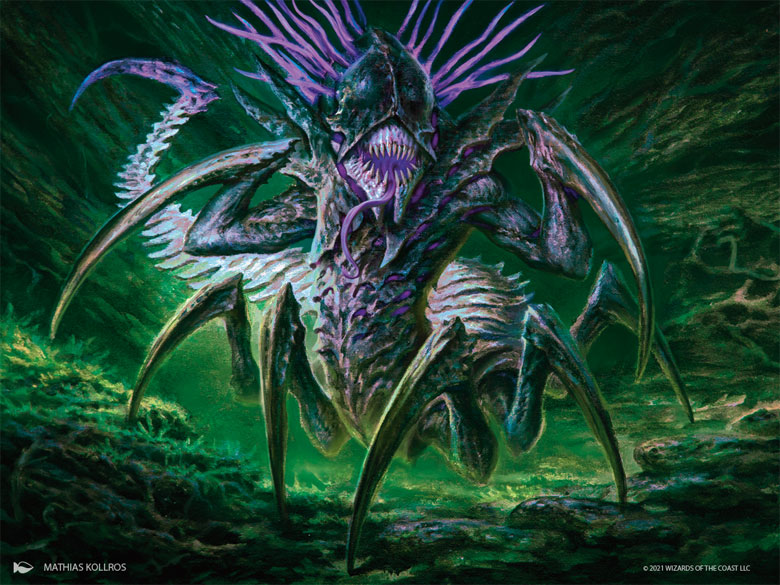 I've dismissed the illusion; please return to your seats. I do apologize, I had forgotten that most students at your level have not encountered an illusion that also includes the sense of smell. Again, the fault is mine, we'll get custodial to clean that up right away.

Now, where was I? Ah yes, to quote the orientation package: "One of the Oriq's most powerful tools is the Mage Hunter, a vile monstrosity created to seek out and snuff out the arcane."

Normally our grounds are protected against such things but in the event those protections prove inadequate, we need to make sure everyone is aware of the danger.

As you can tell from its appearance, the Mage Hunter is indeed a fearsome predator. It has an innate ability that cannot be ignored. The Mage Hunter's very nature makes magecraft in its presence painful and potentially deadly.

While a Mage Hunter can and often will just attack, it's also known to simply wait and let a wizard weaken themselves as they cast spells that are irrelevant to the Mage Hunter. This effect can be subtle and too often a wizard will ignore the debilitating effects of the Mage Hunter only to find themselves too weak to survive a threat from another angle.

Another point to take note of is that the Mage Hunter's effect is cumulative. The more Mage Hunters you face the more painful it is to practice magecraft. And should they attack while continuing to turn your magic against you, you could find yourself in trouble very quickly.

This brings us to what to do if you find yourself facing a Mage Hunter.

The goal is of course to keep the damage to a minimum. Of course one of the best ways to do that is to stop performing magecraft.

What's that? How do you define magecraft? Magecraft is a blanket term we here at the school use to describe casting or duplicating all manner of sorceries and other flashier spells. So if you do not use magecraft then all you have to deal with is the Mage Hunter's physical presence. Summoning creatures to protect you or enchanting the Mage Hunter are both strong options at that point.

I should point out however that most enchantments do not nullify the Mage Hunter's ability so if you've managed to pacify it, that doesn't mean it's now harmless. If you would try to enchant it I would recommend transmutation as an effective countermeasure.

Other options are trying to trick it into an unwise attack or force it to play defense. Just remember that while you may think you have a trick up your sleeve, the Oriq have tricks of their own.

Ultimately how you should deal with a Mage Hunter depends on the kind of mage you are. If your strength is in magecraft, I would recommend destroying the Mage Hunter as quickly as you can. If you are a more visceral combatant focused on summonings and enchantments, you can save your few spells to remove greater threats.

Ah, I see Feyd is here with the flyers. We will of course be posting them around campus, but for now, feel free to take one and share them with any of your classmates that didn't make it to today's meeting. Thank you and stay safe out there. 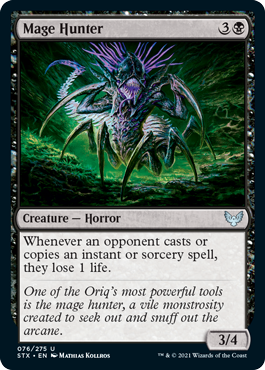 Based on the other previews so far, it looks like Magecraft is going to be a major force in Limited and Standard, and Mage Hunter can certainly be a strong counter to those strategies. By now we're all aware that Chain of Smog does very broken things with Magecraft in older formats, but I don't think Mage Hunter is as useful there. With a mana value of four, Mage Hunter feels a little too slow in those formats.

Commander, on the other hand, is a different story. If you're in a non-competitive Spellslinger heavy meta, Mage Hunter is a decent way to keep pinging these decks and, if you can protect it, keep them from storming off. That's just using the card passively. And what's the fun in that?

One life isn't a lot in Commander, but there are a couple of ways to pump up the Mage Hunter's output. Because Mage Hunter causes loss of life, damage doublers such as Phyrexian Furnace don't work. Wound Reflection, however, does work with Mage Hunter. Another way to push the effect is cloning your Mage Hunter. Besides Clone and similar creatures, you could use Followed Footsteps. Footsteps is slow, but you're likely to get a couple of copies before people register the danger.

Now, you can't normally control when an opponent casts a spell. There are a couple of cards that can help with that: Omen Machine and Wild Evocation. Omen Machine is more effective, because it forces players to use the spell or lose it, and, given it's a symmetrical effect, any threats your opponents drop are as likely to target each other as you. Possibility Storm is also, well, a possibility, as any instants or sorceries cast cause a second instant or sorcery to be cast.

The biggest problem with Mage Hunter as a win condition is what to do if your opponents don't have instants and sorceries to cast. That's where the "cast or copy" part comes into play. Curse of Echoes says, "Whenever enchanted player casts an instant or sorcery spell, each other player may copy that spell and may choose new targets for the copy they control." Find the spellslinger in your pod and curse them to give everybody instants and sorceries. Worst case scenario you cast it on yourself, but I really don't recommend that. Do note that Curse of Echoes is a "may" ability, so they may choose to do nothing.

Why give them the choice? What if we use those favorites of combo players everywhere, Hive Mind and Eye of the Storm?

Hive Mind says "Whenever a player casts an instant or sorcery spell, each other player copies that spell. Each of those players may choose new targets for their copy."

If you want to really turbocharge this nonsense, you can add Possibility Storm to the mix. Possibility Storm will find a second instant or sorcery, so stack it so that trigger is between the Hive Mind and Eye of the Storm triggers, Eye of the Storm will exile both the original spell and the spell revealed by Possibility Storm, ramping up the damage. You could also do similar shenanigans with Orvar the All-Form, casting spells like Twiddle or Chain to Memory targeting Mage Hunter to make copies of it while feeding those spells to the storm.

One important thing to note: the spells Hive Mind copies for the other players will resolve before yours. However, if you hold priority and can cast enough instants in response to the previous instant you cast, not letting anything resolve, they will die to the life loss triggers resolving before any spell copy resolves. That's going to be difficult to pull off, so it's best to avoid using removal and burn spells to fuel the combo. You may have Narset, Parter of Veils or Hullbreacher around to negate your opponents' draws from the spells you cast. Similarly, Opposition Agent will let you cast tutors with the combo out without letting your opponents dig for answers.

Don't forget any spell an opponent casts also triggers both Hive Mind and Eye of the Storm, so you can respond to their answers to keep building the chain.

Is this an easy win?

Is this a complex and absurd win condition that will probably require a judge call or two before it's all over?

If that's your idea of a great Commander game, then I wish you joy and happy hunting!

Thanks to Wizards of the Coast for providing us with this free preview card!