S Guest-only Advertisement. Login or Register to hide this ad.

As Magic the Gathering increases its presence in the E-Sport world, new faces have appeared to help Wizards of the Coast introduce the game to people who have never stepped into an LGS. We're talking to one of those new faces today. One of the newer members of Wizards of the Coast's on-camera coverage team Eilidh Lonie, also known as AliasV.

Hello Eilidh, thank you for joining us. Just in case we've got some readers who are unfamiliar with you and your work, would you care to introduce yourself?

Thanks for having me! I'm Eilidh Lonie, better known as AliasV. I'm a full time Magic: the Gathering content creator, commentator and crazy cat lady.

Let's start with getting to know you as a magic player. How long have you been playing magic, and what got you into it? Did you get into Arena right away, or did it grow on you? 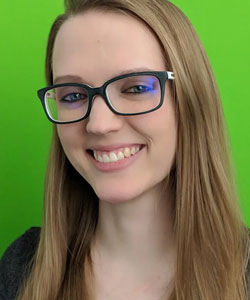 I've been playing Magic since 2018 and got into it when I saw Arena on Twitch during the closed beta. Wizards reached out to me and asked if I'd be keen to give it a go and I did! Arena actually got me into paper Magic.

What is your favourite format to play, and do you prefer to play casually or competitively?

I love limited because it's always an even playing field and you're never fighting against someone else's wallet, only their luck! I lean more towards casual play but that doesn't mean I don't like winning.

Do you have a strong preference on the kinds of decks you play (ie: aggro or control), or do you like to change it up?

Aggro and midrange are my preferred decks. I couldn't really be bothered playing control unless absolutely necessary. The faster I can win, the better!

What about your favorite colors and color pairs to build? Anything color(s) you always gravitate to or shy away from?

I love black and white decks. Aristocrats are one of my favourite archetypes as I enjoy getting value from creatures when they die. I'm not a fan of blue, especially counter spells. I'd rather have my stuff killed than countered.

What's your favorite pet card that you think should be given more love?

Any and all vampires. I'm a big fan of the little suckers.

If you had to pick a singular Commander deck that you built as your favorite, which would it be and why?

My Edgar Markov vampires deck. I love tribal decks and vampires are in the colours I enjoy playing most.

What first made you decide to start streaming, and were your aspirations to make it into a career?

Watching other streamers and hearing them talk about streaming as a career sparked interest for me and my husband. He decided to give it a go, didn't take to it, then let me use all his stuff to stream when I asked. I started streaming for the fun of it and my channel grew pretty significantly in a short amount of time, so I decided to try make it a full time thing. I managed to do so earlier this year!

You're a well known commentator for Wizard's coverage team. How did the role come about?

In 2019, Wizards held the Mythic Invitational at PAX East and asked if I'd be keen to commentate at the event. I was surprised considering I had zero commentary experience, but they saw something and liked what I did there enough to invite me back for the Mythic Championships!

What's a day in the life like for a commentator? How much preperation is there?

Ahead of a big event, I go over all the meta decks and play them as much as I can. We also have plenty of pre-production meetings and rehearsals to make sure there are no glaring issues from a technical standpoint. We also familiarise ourselves with the players at the event, especially the newer players we may not be familiar with. During the event, we're keeping track of rounds, any significant moments or major upsets, big wins etc so that we can weave a coherent story together from start to finish the viewers. We also double check with R&D how the heck certain cards are pronounced so we're all on the same page.

How much do you try to familiarize yourself with all of the decks in the meta? Do you ever find yourself piloting a deck just to better understand it for future commentary?

All the time. That's what I call my homework leading up to events. I may not enjoy some of the best decks, but I have to understand how they work to commentate on games featuring them.

What do you consider to be the hardest part of doing coverage?

I think I'd have to say technical issues. Sometimes we can't hear each other or the director or the stream drops, or there's a marching band next to our PAX booth and we just have to roll with it. If we need to stall for 20 minutes while things get fixed, we have to be ready to do so. The gameplay side of things is always much simpler!

What are your favorite aspects about it?

I love entertaining and putting on a good show for the audience. I love getting hyped up about games and watching high level Magic is always a rush, especially when the stakes are highest.

You've watched a lot of high profile games in your career. What's your the best comeback victory you've ever witnessed?

I wish I could say I remember every game I commentate, but alas, that's not the case! A game I haven't commentated on that comes to mind for me is Ondrej Strasky's performance against World Champion PVDDR at Mythic Championship 6. It looked like Paulo was going to win it, but Ondrej navigated his way expertly through the 4th game and went on to win it all. It was an incredible match!

What advice do you wish you had been given when you first started streaming, and for doing coverage commentary?

Don't stress about numbers. Have fun. Relax. Those are the three things I remind myself regularly.

Any advice you want to give to others aspiring for a similar career?

Be prepared to work your ass off. It's not easy and it takes a lot out of you when you first get started. Build relationships with others in the community and take chances. Try new things and find what makes you unique and run with it. Don't try emulate well known streamers but learn from their successes and failures. Ask questions, do your research and above all else, have fun. If you're having fun, your audience is too.

What are some others streamers you watch, and your favorite things about their streams?

I watch plenty of Magic streams because I'm slightly addicted to the game, but outside of Magic, I watch CohhCarnage and Ezekiel_III a bunch. They're variety streamers and two of the people who got me interested in streaming to start with.

Congrats on the apparel deal with Coalesce. Do you want to give any hints on what kind of apparel your collection will have?

Thank you! My line is still in the works but I'm hoping it encapsulates what I love doing in Magic most: Go Wide, Go Fast, Go Face!

And finally is there anything you want to say to people who haven't watched you stream yet?

If you like cards, cats and commentary, come on by! We have plenty of those three things for everyone!

I want to thank you for taking the time to join us and answer our questions.