All Aboard the Commander Hype Train in 2020

Recently, Gavin Verhey teamed up with the Command Zone to announce the lineup for the upcoming Commander products in 2020, which you can read about and see here (with added teasers). In case you haven't seen the announcement or read about the full details, I'll quickly cover them and then go into more detail later:

Wow, that's a lot of Commander product next year, and our budgets will be feeling it. But let's dig a little deeper into the known information and discuss what it really means, and parse back some of the hype that we saw in the teaser video.

First off, it is great to see that they are getting back to making five precons instead of four, especially since prices have risen slightly. I suspect that people will be disappointed to see that these precons as well as the Zendikar ones are going to be all thematically tied to one specific plane since one of the advantages the Commander decks have is that they are an opportunity to make new cards from source material around the entire Multiverse.

Since nothing is yet known about Ikoria, we can only speculate as to the individual themes and colors of these decks, as well as other features of this release. Ikoria has been described as the "world of monsters". This gives me the impression that these decks will be based either around a particular tribe or around a particular mechanic. Or, even more likely, it will be a mix of these both. While I don't expect color balance among the decks like we saw in some previous years, I will predict these will be heavier on the enemy color overlap and wedges, since monsters tend to be the enemies of lore. Overall, these decks should be on par with what we have come to expect from precons and we won't start to get hyped just yet. Since the size of the deck boxes is specifically discussed in other releases, I expect that these five decks will be packaged in the familiar boxes with oversized face cards.

This product is interesting. It is a replacement for the traditional planeswalker intro decks, in smaller boxes (meaning there won't be an oversized face card), and with fewer new cards. This means that this is probably a product that the enfranchised can skip over and only buy singles. A strong possible exception is if the reprints are really noteworthy ⁠— after the recent Brawl decks have shown, these could end up being a strong investment with just a few new cards.

Continuing with the comparison to the Brawl decks that got released with Throne of Eldraine, my prediction is that these will be similar in nature, and there will be one or two reprints that make the value of these products worth their purchase price along with a number of solid. I also think that there is a decent possibility that since this product is replacing the planeswalker intro decks we could potentially see weaker versions of the main Zendikar Rising planeswalkers in these decks with the "this card can be your commander" rules text on it. 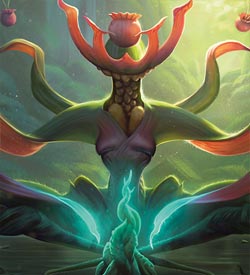 Thallid, is that you?

Filling the space where we have seen Signature Spellbook products, this is a product directly aimed at the players who like to bling out their decks. From a practical standpoint, this is a product you can skip if you just want to get any version of a card for your deck. It's unlikely to affect existing prices, but we will probably at least some initial dip in prices for other versions of these cards. Moving forward, this "Signature Spellbook" product slot will probably rotate between what we have seen with Jace and Gideon and a Commander-themed set based around colors. This product will be available at all WPN stores, with their status depending on whether they receive foil or nonfoil versions of this product.

Unlikely scenario #1:
This is a stand alone box, akin to a four person cube. Logistically, this would be the easiest way to ensure that you aren't drafting the same card more than once. However, because the product announcement stated that each pack contains a foil, it stands to reason that foils will be available for every card in the set, making this scenario unlikely. If so, however, it will lessen the need to buy more than one box just to acquire the cards.

Scenario #3:
Somewhere in the middle of this. There will be some method to keeping the boxes unique, but throw in a random foil card which may or may not overlap with the rest of the box, to be set aside if drafted in tandem with the nonfoil version.

Scenario #4:
I'm dead wrong and you might get four copies of one card in a box. In this case, I have no idea how they'll handle the singleton nature of the format. Like Zendikar Rising, there will also be two precons tied to this release, with six new cards not found in the draft set. My prediction with this set, based on the fact that in the video Gavin specifically drew attention to one teaser art being horizontal, is that we will see planeswalkers as commanders again in this set. 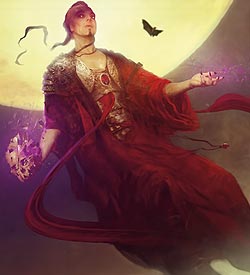 Even Gavin couldn't contain his excitement for the new Baron Sengir

What really excites me about this product, which takes the supplemental slot where we have seen Masters and Conspiracy products, is the potential for quality reprints. One thing that Wizards constantly struggles with is finding places to add reprints to new sets, and the popularity of Commander means that high demand reprints keep creeping up in price (I'm looking at you, Rhystic Study). The one thing I've learned from building and maintaining a Commander cube is that with around 20,000 unique Magic cards out there, a proper cube doesn't contain any chaff regardless of rarity or physical price of a card. So even though players naturally want to see how much reprint value there is in a set, my prediction is that Commander Legends will have far fewer "wow this card is really bad in Commander" cards than we have seen in the past, even if you open a dud pack with yet another Charmbreaker Devils. Another reason I look forward to this product is that one thing I've wished to see is a "Commander Deckbuilder's Toolbox" product, and I think the potential is here for a lot of high quality reprints and a perfect product, albeit expensive, way for a new player to buy one product and get loaded with format staples without a lot of chaff cards that don't see play in Commander.

One of the things that kept being repeated during the video was that it's a great time to be a Commander player. While there is arguably some dispute about that (I think most Commander players wished they had played before the format started affecting the price of cards), next year will certainly be a great year for us. We are getting NINE precon decks aimed directly at us with a total of 83 brand new cards between them. We are getting a supplemental set that has another 70+ brand new cards, an exciting way to play Commander that traditionally has a daunting barrier to entry, and hopefully lots of great and needed reprints. And we are getting a small pack of cards geared for the collectors and players who like to bling out decks. Plus we are now seeing dedicated CommandFest events where players from all over can get together and play the greatest format in Magic.

As much as I would love to see a Commander Legends product every year, I know it won't happen. But what I do know is that success breed repetition. And between the surging popularity of Commander, the attention they've been giving to us in the form of events, and now replacing planeswalker intro decks with more Commander decks, it really does seem like it's even easier to enter the format.